No Other World: Essays on the Life-work of Don Maclennan

Don Maclennan (1929-2009) was one of South Africa’s most prolific and accomplished poets and a revered teacher. Though well-recognised as perhaps the country’s foremost poet of his day, he has received very little sustained critical attention. No Other World sets this to rights, offering both heartfelt tributes from fellow poets, academics, students and friends, and essays of rigorous criticism of his life-work from some of our most acclaimed scholars. These include Professor Malvern van Wyk Smith, one of our wisest commentators and a long-time colleague of Maclennan’s at Rhodes University; Professor Laurence Wright, director of the Institute for the Study of English in Africa; former editor of the Daily Dispatch, Gavin Stewart; and acclaimed composer and music theorist Michael Blake. The tributes from fellow-poets and several former students are not merely eulogies to a fine mentor, but insightful approaches to the poetry itself. Several fascinating themes are explored in some detail, including Maclennan’s approaches to spirituality, music, drama, and the prehistoric. The volume also includes a thorough introductory biography by his widow Shirley, and closes with the first comprehensive bibliography of his work, compiled by Andrew Martin of the National English Literary Museum. The fifteen essays, in sum, serve not only as a tribute, but as a model for studies of South African poets and poetry more widely, writers who are consistently, indeed shamefully, ignored even within the literary establishment. This collection emphasises the unique insight, creative verve, and rigorous thought which good poetry brings to the literary and social life of the country.

No Other World explores the life-work of poet Don Maclennan, offering both heartfelt tributes from fellow poets, academics, students and friends, and essays of rigorous criticism from some of our most acclaimed scholars. 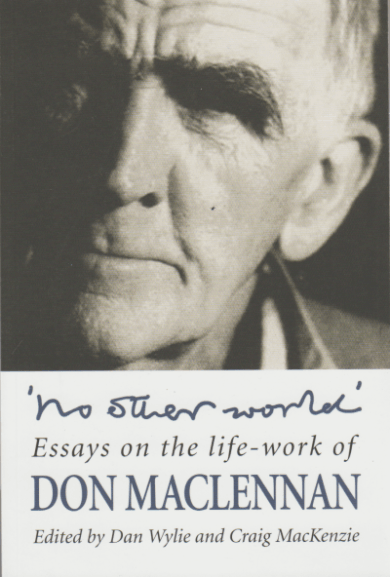