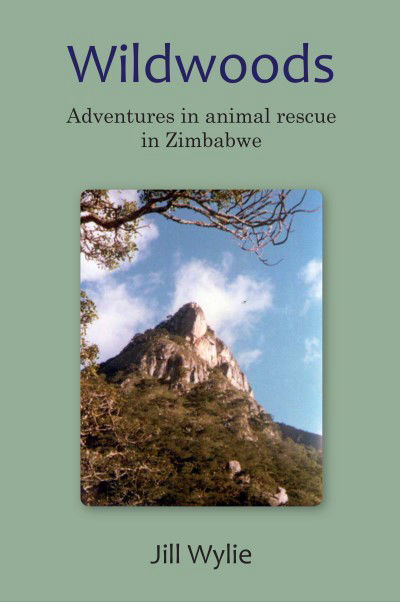 Wildwoods: The making of a wildlife haven

A parallel text to Search, this compact account relates the stories of the sundry orphans and rescue animals that punctuated Javelin’s searches: the bushbabies and the genets, the pups and kittens, the leverets and the duikers – all those raised and treated, re-homed and rehabilitated to their natural wildness on Wildwoods Sanctuary in Zimbabwe’s eastern mountains.

Wildwoods relates encounters with sundry orphaned animals which are interleaved with Jill Wylie’s other two books, Call: Life with a Basenji and Search. The latter concentrates on the dog-rescue searches conducted by Jill and her Dobermann, Javelin. Like that book, then, this one tracks Jill and her family’s moves from the little mining village of Penhalonga, north of Mutare; to the property named Amberley in the neighbouring Imbeza Valley; finally to Wildwoods in the Vumba mountains. From 1971 almost to the present, Jill endlessly applied her unquenchable love to animal rescue and rehabilitation. Though set in then Rhodesia in the 1960s and ‘70s, the techniques are timeless – as is the love.

[Extract] Javelin stood poised on the high ridge of the hill, her fine Doberman coat gleaming in the hot sun. With her stood Call, the Basenji, old now and wise, and Tellme, part-Basenji part-Keeshond. Their tails reflected their tension as they watched a great wall of flames and smoke advancing down the neighbouring hill towards us. Soon, they knew, they could be called upon to run across to it to round up all the animals they could find and bring them up here to the safety of our land, across our wide, cleared firebreak – safe not only from the fire but also from the clutches of the forestry firefighters, doing a sterling job although far from their plantations.

Here, in the Eastern Highlands of Zimbabwe, the thriving forestry industry was taking more and more of the lovely wooded hills with their deep, heavily-forested gullies or dongas for pine, gum or wattle plantations. From our rented house, “Amberley” in Imbeza Valley, with its steep narrow strip of land, we offered what sanctuary we could to the displaced and harassed wildlife.

When the fire reached the shallow gully at the base of the hill, where animals might be sheltering, I called to the dogs, “Come on! Let’s go!” which sent them racing silently down through the dry, shoulder-high grass.

This time I didn’t go with them. Pressing myself against a tree I stood motionless and soon the animals came, some crouched and nervous, some wide-eyed and bounding. Duiker; bushbuck; our rare mountain reedbuck; a sounder of bushpigs of all ages under the strict control of their fierce silver-maned boar; a clan of twittering banded mongooses; and further along a slender mongoose, solitary as always, his black-tipped tail held high over his rufous back. A magnificent bushbuck stag, his horns streamlined back along his neck, saw me, gave a sharp bark of alarm, turned back towards the advancing flames, thought better of it and leaped past me to safety. I grieved for the small and the slow, the snails and the tortoises, the lizards and the ever-fascinating “chongololo” millipedes.

Now the fire crossed the gully and came roaring up towards us, fanned by its own hot draught, sounding like a convoy of army trucks. In a moment the dogs returned, panting hugely and tremendously pleased with themselves.

My effusive praise was interrupted by a sound as of someone rhythmically shaking a couple of tins half-filled with sand. We knew what that was! Pressing against each other we waited motionless while two porcupines, disgruntled at having to move in daylight, crossed the firebreak near us, their quills rattling at every step.

With them safely out of our way we slipped and skidded down as fast as we could to our water reservoir. There I sent the dogs to look for April, a young hand-reared duiker now gradually going wild and favouring a tall stand of golden grass, so close to the colour of her coat, just beyond the firebreak, while our gardener Hosia and I armed ourselves with rakes and branches and went out to meet the advancing flames. We were still hard at it when frightened little April crept into the garden with the dogs and Javelin came anxiously to my side.

Our firebreak held. The flames died down along its edge, in spite of the wind behind them, and were finally overcome. Hardly had we cleared our lungs of smoke than another fire started at the junction of our Imbeza valley road and the road to Penhalonga village, probably from a cigarette butt tossed carelessly from a car window.

There was no stopping this one. Leaving the dogs to look after April I drove ahead of it to the riding school that was right in its path, to see if they needed help to get their horses out of the way.

I could find no one in authority there, and the staff had no idea how many horses were out in the paddock. I sent them running through the long grass as the fire crackled into it and they found eight. I found two mares with foals and herded them into the kitchen yard.


Then other people came from all around and started a backburn – which itself got away and did almost as much damage as the main fire. They had to fight to put that out first as it was much nearer the house.


With all the noise and smoke the neighing horses milled around and kicked at each other in the only safe place I could find for them, a small sort of sheep pen behind the house. I found myself on my own, all the staff having gone off to fight the fire. I wondered what I would do, or could do, if the horses panicked and broke out. The mares with their foals by the kitchen rolled their eyes but took it more calmly than the others. I moved around them all, singing softly, until the fire swept on by – and a tiny bushbuck fawn, a few days old and totally confused, wandered out of the smoke, bleating plaintively and following anything that moved – the most perfect little thing you could ever lose your heart to.

As I reached home with him Jack drove in from his workplace in town, bringing our young son, Danny, from school, choking on the smoke and roaring with relieved laughter that our house, at least, was safe.